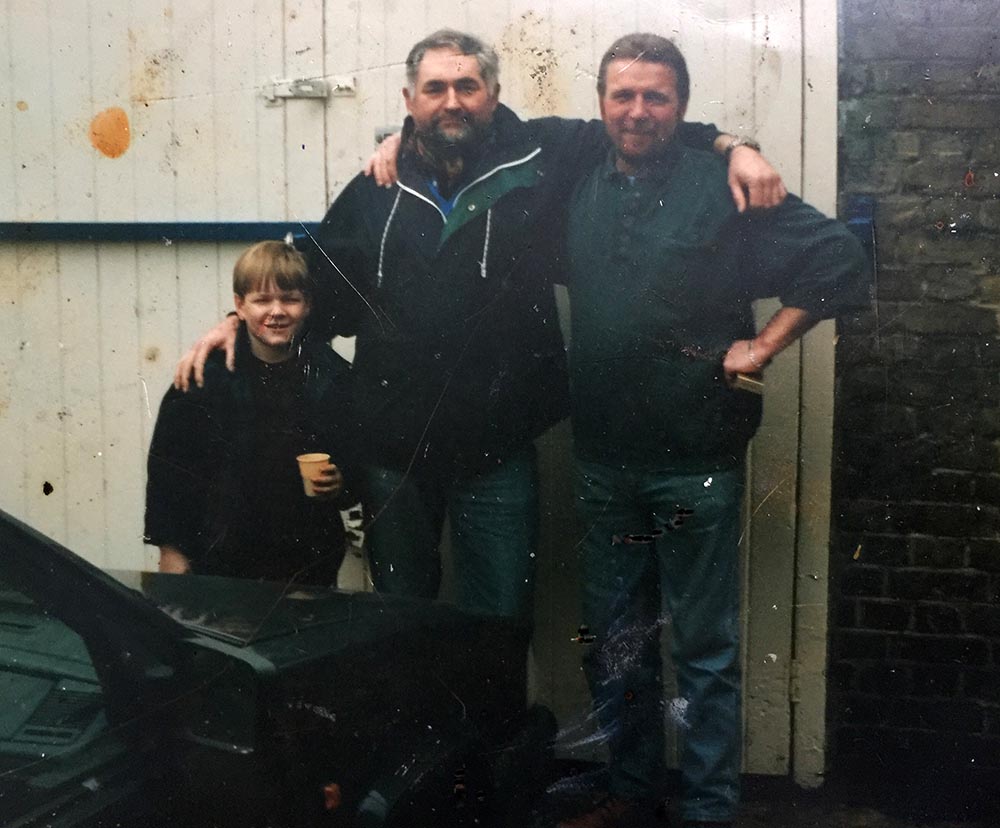 Born 1954, Peter O’Neill, aged 19, started out welding and creating objects with wrought iron and steel in a garden with his best mate Colin Cornwell. They then went on to working for Cubows Ltd., at the Docks in Woolwich; building, repairing tugs, trawlers and coasters until, in 1976, they opened up their first business together, called Cornwell & O’Neill based in Greenwich.

The business operated across two large workshops, which were based at 21 Greenwich High Road, and shared the yard with Mumford’s old flourmill.

From a very young age I often went to work with my Dad at weekends and during the summer holidays. From going so often I could see how he played a key role in the community; anyone who passed by would stop to have a chat over the stable door, or a neighbour would just pop in to have their garden shears sharpened. I even remember the comedian Gareth Hale from Hale & Pace popping in one afternoon to talk about a job.

My Dad did a lot of work for the area, whether it was a small repair job or making a staircase, he enjoyed every minute and was very hard working. I would guess that most railings or gates in the area were most likely made or repaired by my Dad. Nothing proved this more then the week after his death, when two local people I had never met but came into contact with told me that they knew of him and one had window boxes made by him back in the early 80s.

Dad once told me about a job he did once for a high profile celebrity born in the areas (I won’t mention his name!) Let’s just say that since that day my Dad always called him “Tricky Dicky”. My Dad made gates and railings for him but didn’t receive payment so he went to the house and started to remove them. Out ran Tricky Dicky in his bathrobe shouting to find out what was going on and saying that Dad couldn’t remove the gates and railings, as they were his. My Dad asked how they could be his when he hadn’t paid for them? With that Tricky Dicky quickly paid his bill and my Dad left, leaving the gates and railings in place.

The workshop on Greenwich High Road was sold for redevelopment in 2000 so Dad moved up to Guildford Grove, where the business still operates from today under the name Greenwich Forge. Dad’s work meant a lot to him but unfortunately, due to ill health over the years, he had to cut down on his time in the workshop – but even when he wasn’t there he still continued to give great advice.

My Dad worked in the community for almost 40 years and made a big contribution to the area in that time. I am proud of the man he was and the work that he did. I have lots of fond memories of my time with him in the workshop and I hope that other people in the community will remember him fondly as well.

Some of the GHS Council paid a trip this week to the workshop within the Old Royal Naval College where architectural historian Andrew Byrne and model-maker Dave Armitage have been toiling away on the London 1840 project – members may remember that we received a short introduction to the ambitious project by Andrew last year.

Their task is a daunting one: to create a 1/1500 scale model of the whole of London as it was in 1840 with every building in the city researched, using various archives and photography, and then recreated with an accurate representation of its size, profile and roof.

The finished project will be some 30ft by 20ft, approximately, so the city has been broken down in to modular sections like large jigsaw pieces to enable them to work on it in the space which has been made available to them.

We were able to view the work which has been done on a section of East London which includes St Katharine Docks, London Dock and one of the large sugar warehouses that would have dominated the area then. This section is to be shown soon in Tower Hamlets Archives’ Mapping the Hamlets exhibition, coming soon. As work continues, it is hoped there may be other opportunities to show off sections before a home is eventually found the finished work.

Andrew says he’d always wanted to build a time machine and this project is the next best thing. We wish London 1840 well and look forward to following their progress. A new website will be launched for the project in the coming weeks and we’ll update his post when that is available. 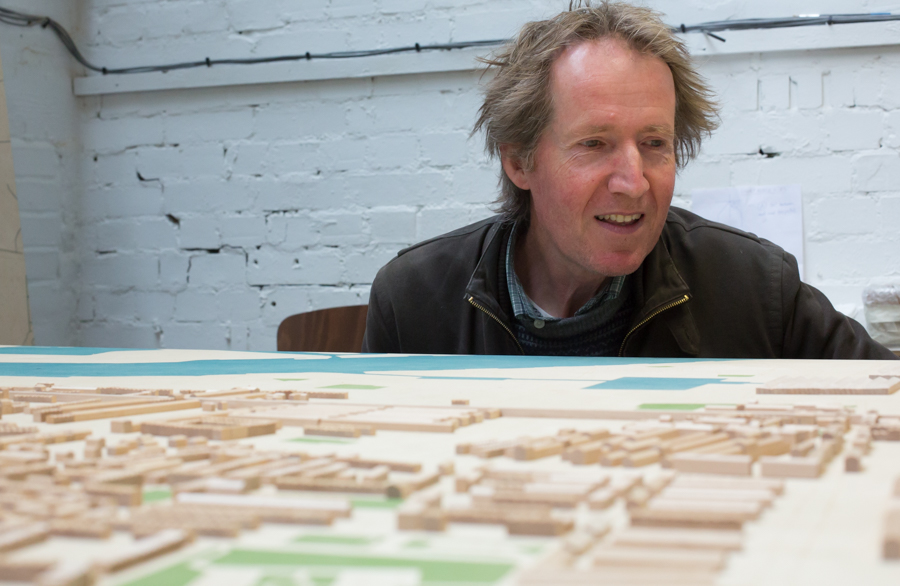 Andrew looks down at the 1/1500 scale model of London 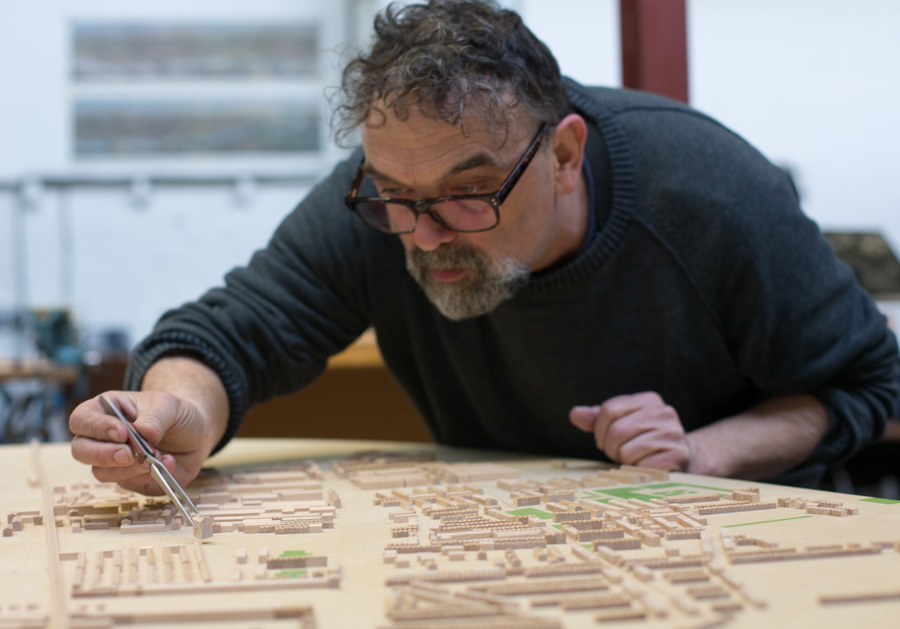 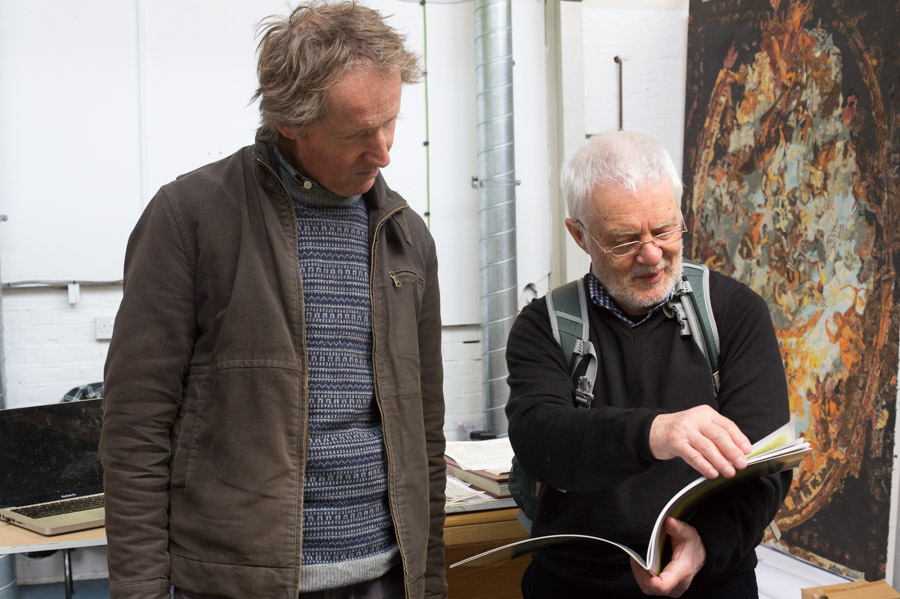 Andrew and Julian Watson look through the Greenwich Revealed book which Julian co-authored with Neil Rhind. 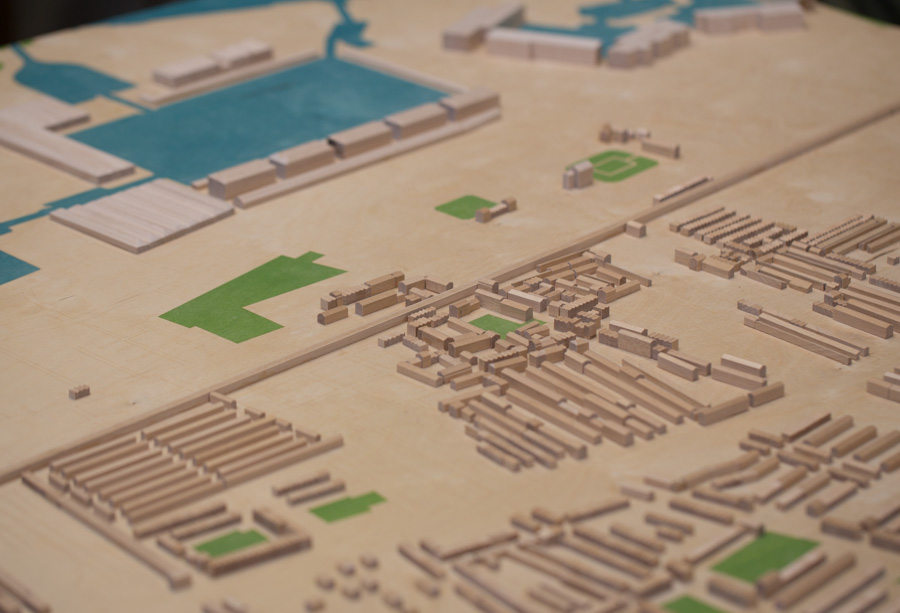 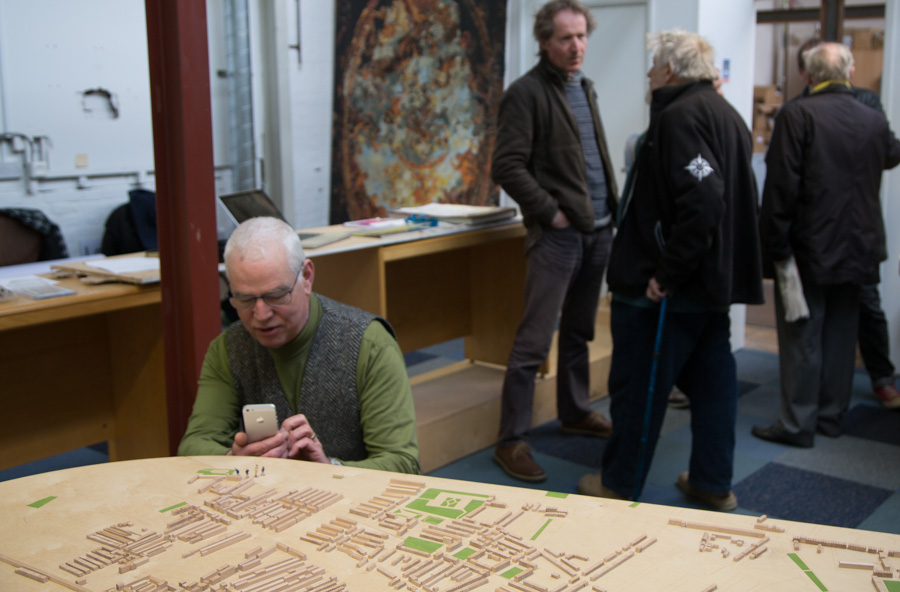 Our president Anthony Cross takes a photo of the impressive piece of work which is still only in its early stages.

Barbara was a Wellard who were a remarkable local family heavily involved in local politics. Her parents – and in particular her communist uncle, Charlie – were well known in Greenwich and Woolwich. His son Chris’s record shop was the place to be in the 1960s. Her parents were both strong Labour Party activists. But Barbara made her own mark as an important Greenwich historian. Brought up in Greenwich she attended Invicta and then the Roan Schools.

Julian Watson writes ‘I started work in the Local History Room at the old Blackheath Library in St John’s Park 1965 and it wasn’t long before I became assistant to June Burkitt in the Local History Room. It was there that I first met Barbara and we got along well immediately. She had already finished her London University diploma course in local history and I remember reading her dissertation, which is preserved in the Greenwich Heritage Centre.

The Local History Library was a fairly new initiative, which was far too big for one small room so an attempt was made to create a Local History Library at Charlton House. Sadly this failed because suddenly ‘Woodlands’ in Mycenae Road was on the market and threatened with demolition. Greenwich Council acquired it and the Local History Library was created there rather than at Charlton House. I, with two new members of staff, moved the collections there in 1970 and Barbara, who had been working as an adult education lecturer, was appointed as our Education Officer and Senior Library Assistant – she had worked at the National Central Library. She did all our timesheets and most of the general administration because I was gathering in all the other large and dispersed collections: the Woolwich and Kent Collections from Woolwich Library, council archives from the old Greenwich Town hall and Woolwich Town hall plus collection from Eltham library.

Barbara was an outstanding historian and communicator and always great company. She was married to Roy Ludlow who was a very talented and engaging man. He designed bank note printing machines for De La Rue and had a very busy life particularly when former colonies became independent and needed their own currency. They had two sons, Christopher and Michael.
Barbara was needlessly anxious about her ability to write but produced many outstanding pieces of work. She wrote many fine articles in the Transactions of the Greenwich and Lewisham Antiquarian Society and the Journal of the Greenwich Historical Society, made a substantial contribution to Sally Jenkinson’s series of publications for the Gordon Teachers’ Centre – effectively a joint author. Barbara co-wrote the Combe Farm volume with Sally in that series. Barbara’s ‘Greenwich’ book for the History Press, published in 1994 has been reprinted many times and still sells well. She and I produced “The Twentieth Century: Greenwich” and later “Greenwich Then and Now.” She also contributed an important chapter to “Aspects of the Arsenal” which was published in 1997.

Barbara was a fine speaker and was, in retirement, recruited by the late Ivan Howletts, the producer of the Radio 4 ‘Making History’. They became friends and he used her on several of the programmes. She and I did one programme about the Enderby family of Greenwich. Her work in schools and colleges was much admired – the students were not only fascinated by the content of her talks but they also behaved well. She was a natural teacher and lecturer. A powerful memory for me and a great achievement for Barbara were her talks to the patients at Bexley Mental Hospital. There was constant noise from the audience, which flowed in and out of the room with much shouting, but it was a very great success and the patients all loved her visits.

Barbara was a natural scholar – she said that she had only one ambition and that was historical research. She applied great intellectual rigour to her research and writing, never fully trusting published works but always going to the primary sources. She solved the mystery of the local Domesday Book entries, which had defeated generations of learned professors and antiquarians. After her retirement she was contracted by Greenwich Libraries to research historical documents relating to the Royal Arsenal at Woolwich as part of the European funded Konver project. This she did with great thoroughness, researching at many repositories including The London Metropolitan Archives, The National Archives and the Ministry of Defence. It was a very fine piece of work. On my last visit to the Greenwich Heritage Centre, I noticed that a volunteer was using her work and was thrilled with what she had done.

I have missed and will always miss our regular long telephone conversations about historical matters and shared memories. To finish, I treasure this tribute from June Burkitt, Greenwich’s first Local History Librarian, in reply to my message telling her of Barbara’s death:
“She was an extraordinary person, highly intelligent, compassionate and with a strong sense of human justice and decency. I have never known anyone quite like her.”

Unfortunately due to current restrictions and government guidelines our next meetings at James Wolfe School are cancelled until further notice. We do however intend to keep in touch by all other means. Watch this space.