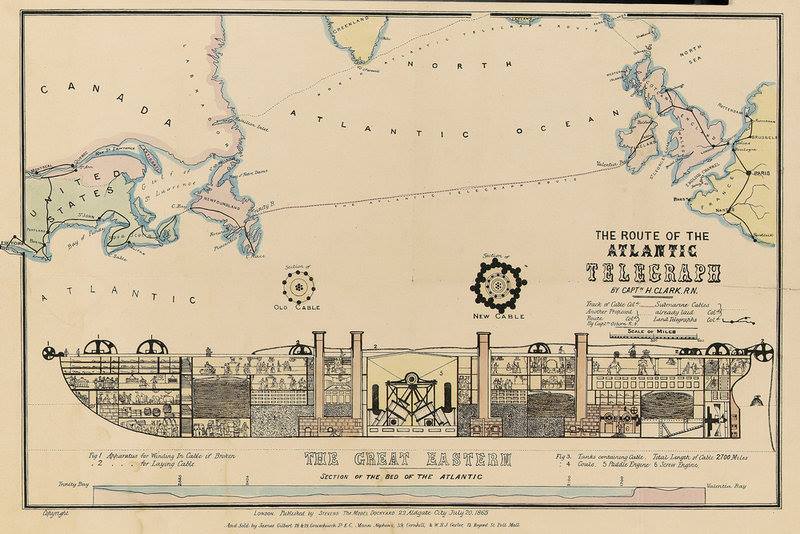 A reminder of our forthcoming GHS meeting next Wednesday 24th October when Julian Clark will present The Leviathan and the Internet: The Great Iron Ship and the Thread Across the Ocean. This commemorates the 160th anniversary of the SS Great Eastern being launched in the River Thames near Greenwich and Julian explores her significant contribution to transatlantic cables. This anniversary is shared with the completion, in 1858, of the first Atlantic cable that was sadly short lived, but successfully superseded by Brunel’s Great Iron Ship installing the successful 1866 cable.
Hope to see you there: James Wolfe School, Royal Hill, 7.15pm for 7.30pm.

National Service formally ended in the UK on 31 December 1960, the last National Servicemen leaving the armed forces in May 1963. Conscripts were at least 18 years old at the time of their ‘call-up’ papers, so therefore those who remember the experience are now well into their three score years and ten. Representatives of the Army, Navy and Air Force, all of them Greenwich residents, will give some account of what it was like to spend two years in uniform, obedient to the last order. Not all are fond recollections. To give balance and perspective to the evening, the representatives of the armed forces will be joined by a ‘conchie’, i.e. a conscientious objector, one who refused to answer the call to arms. It is hoped that the evening will be more than just personal recollections, but audience participation too. Get fell in at 7.30 sharp! 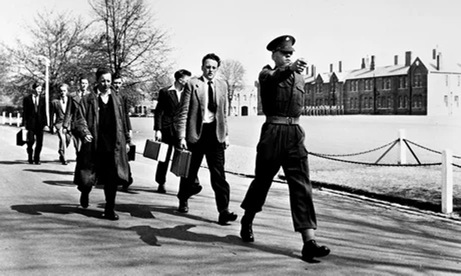 September 26th 2018 at James Wolfe Royal Hill Campus. Meetings commence at 7.30, doors open 7.15. We welcome non-members, from whom we invite a donation of £3 for each meeting.

Will Palin, Conservation Director at the Old Royal Naval College will explore the life and work of the architect and engineer Daniel Asher Alexander. Alexander was surveyor to the London Dock Company between 1796 and 1831 – and also employed by Greenwich Hospital to design and oversee the building of the colonnades flanking the Queen’s House between 1807 and 1816. 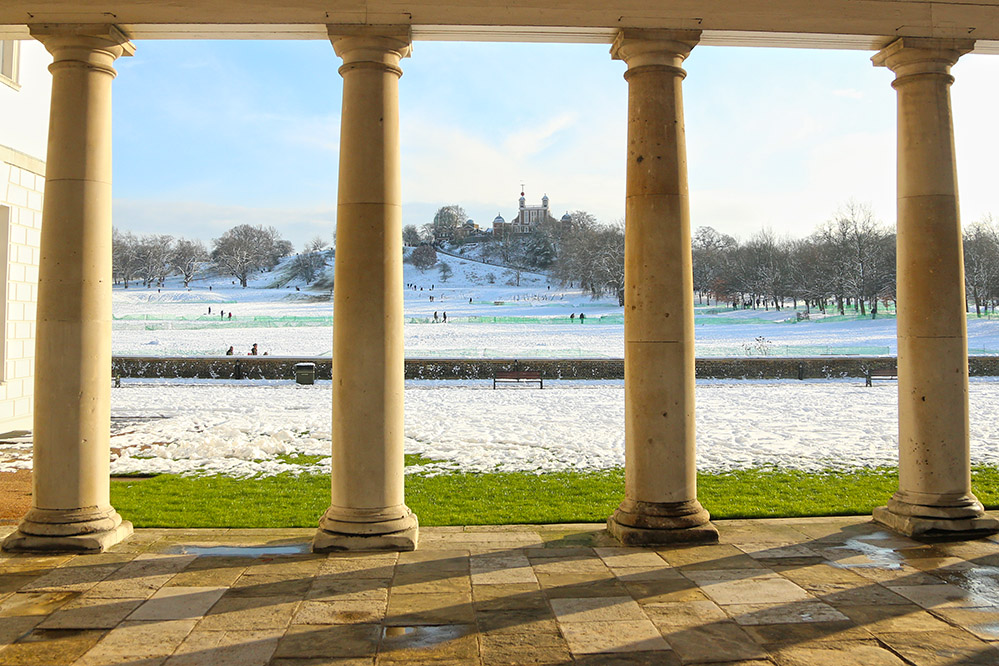 May 23rd 2018 at James Wolfe Royal Hill Campus. Meetings commence at 7.30, doors open 7.15. We welcome non-members, from whom we invite a donation of £3 for each meeting. 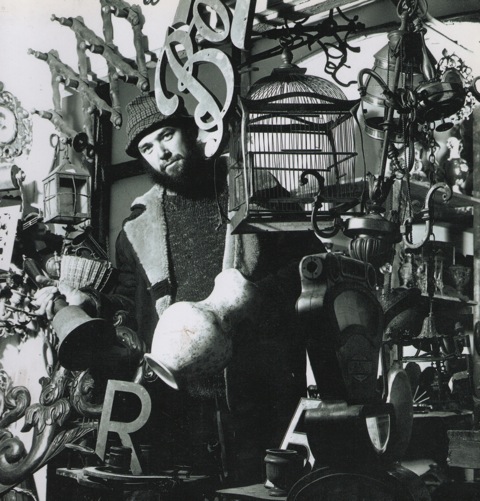 Horatio Blood celebrates the distinctive milieu of twentieth century Greenwich and explores its decidedly Bohemian flavour. He casts a particular eye upon The Spread Eagle in Nevada Street – the best junk shop in the world – at the heart of Dick Moy’s extraordinary empire, which exerted its influence on Greenwich for almost half a century.

April 25th 2018 at James Wolfe Royal Hill Campus. Meetings commence at 7.30, doors open 7.15. We welcome non-members, from whom we invite a donation of £3 for each meeting.

Anthony will revisit Rev. Charles Spurgeon’s 1885 Boxing Night ‘lecture’, “Street Characters and Cries.” in which he used his magic lantern to entertain his congregation at the South Street Baptist Chapel, Greenwich.
The photographs showed a variety of the street sellers who plied their trade throughout the town. Some of them are dressed in their best for the occasion whilst others go barefoot. The talk will investigate the purpose of the show, and then look out for their heirs and successors in the present day

March 21st 2018 at James Wolfe Royal Hill Campus. Meetings commence at 7.30, doors open 7.15. We welcome non-members, from whom we invite a donation of £3 for each meeting.

PLEASE NOTE THIS EVENT IS ONE WEEK EARLIER THAN PREVIOUSLY ADVERTISED AND WILL TAKE PLACE ON MARCH 21.

Andrew trained as a surveyor but later moved into the study and repair of historic buildings. Four years ago he started LONDON 1840, a project to build a 1:1500 wooden scale model of London as it was in that year. Currently housed at the Old Royal Naval College, Andrew, assisted by his colleague David have built a large section of the East End and are currently engaged on the modeling of Greenwich. The Greenwich panel will be on display whilst Andrew takes us on a ‘virtual’ walk around Greenwich introducing us to some fascinating buildings, some of which, he says, may be unknown – even amongst the GHS cognoscenti!. For further details please see: www.london1840.com

February 28th 2018 at James Wolfe Royal Hill Campus. Meetings commence at 7.30, doors open 7.15. We welcome non-members, from whom we invite a donation of £3 for each meeting.

The history of the Royal Arsenal, Woolwich, began in the seventeenth-century and developed and expanded over the following 350 years. The archaeological investigation of this nationally important site only began in 1999 but has continued every year since. This talk will look at the history and archaeology of this fascinating site as well as how it was possible to record such a vast site that produced surprises along the way including evidence that took Woolwich back 6,000 years as well as how the regeneration of the site formed part of a European project.

January 24th 2018 at James Wolfe Royal Hill Campus. Meetings commence at 7.30, doors open 7.15. We welcome non-members, from whom we invite a donation of £3 for each meeting.

Richard Hill, an architect working with Richard Griffiths, has identified a beautiful elevational drawing of the north side of the Church of St Alfege as by Nicholas Hawksmoor. In doing so, he has also made some new discoveries to do with the church and Hawksmoor.

November 22nd 2017 at James Wolfe Royal Hill Campus. Meetings commence at 7.30, doors open 7.15. We welcome non-members, from whom we invite a donation of £3 for each meeting.

Veronica Thornton taught art in south-east London for 30 years and is now based in Cambridge. She has just written her first novel, set the 1970s. and partly inspired by the long abandoned Greenwich to Crystal Palace Railway. As part of her research Veronica used old maps, various archive photos and magazine articles related to the subject. These are the images she will share in her talk, to show the railway as it was at different times in the 20th century. She will also explain how photos of the railway helped confirm the location of a Pissarro painting.

* ‘Screaming Alice’ is Cockney rhyming slang for the Crystal Palace.

They say a church is built of “stones” and also “living stones”.

Fr Kevin will speak to you in a few moments about the “stones”of our church. My interest is more in the “living stones”, or rather, those that went before us.

Any discussion about our present church has to start with the catholic naval pensioners of Greenwich.

In the late 1700s their pastor was Fr John Griffiths who operated out of the London Road chapel.This had been built by catholic architect,James Taylor,of Islington.

Fr Griffiths was determined to have a place of worship for these  “old worn out sons of the sea”, near the Naval Hospital. Mr Taylor who owned a house on Park Vista, next to The Plume Of Feathers, agreed to lease part of his spacious back yard to the church. Fr Griffiths attempts to raise £1200 only achieved £260, but Mr Taylor stepped in and made up the shortfall. By 1793 St Mary’s Chapel was built. Mr Taylor also housed the priest at that time, in Clark’s buildings. The congregation then was made up of “Aged and infirm pensioners and the labouring poor”, according to The Laity’s Directory To The Church Services in 1825.

In an article published in The Penny Christian Magazine of April 1833 a reporter writes a glowing account of the Royal Naval Hospital.In it he reassures the public that these old men,who have done their country such service, are being well looked after. Even their spiritual needs are being attended to,and all faiths are respected.

He says ,”By an esteemed officer in this establishment we are informed…….that about 250 profess the Roman Catholic faith and are lead out by a boatswain of their own persuasion to their Romish chapel in Greenwich”.

Fr Richard North, a young priest of 28yrs, arrives here in 1828. He describes the chapel thus in 1846, “It is a miserable building in an avenue of horrors!”

We know he started fund raising almost immediately. He got the old tars to give one or two pennies a week, from their allowance of a shilling from the Navy. And he wrote incessantly to the Catholic press of the time about his cause for “The companions of Nelson and other heros”. By 1841 he had managed to collect approx. £900, a vast amount for that time, especially considering how poor the donors were.

Unfortunately, Wrights Bank, where he had invested the money failed and he lost everything.

It must have been crushing but, he started all over again and redoubled his efforts. He says himself in one letter, to be priest in want of money for a church, “One needs the tenacity of tooth of a bulldog and the hide of a buffalo!”. The Admiralty even donated £200 to the fund in recognition of his efforts with the old sailors. Amazingly he is sending money to Ireland also, to aid the poor there at the onset of The Great Famine.

By 1846 though, enough money has been raised to buy a site, clear it and start building. By 1849 the spire is raised and by 1851 the first Mass is said. In 1852 it is finally consecrated to Our Ladye Star Of The Sea.

Our church, these “stones”, have been at the heart of our community for 166 years.

For prayer, for meeting, for solace on dark days and added joy on the bright ones. We give thanks for the determined pastors and generous sailors who made it all possible.

“Our Ladye Star of the Sea” lecture was given on Wednesday 27 September by Father Kevin Robinson.